Small league at Steinberg began in 1961. 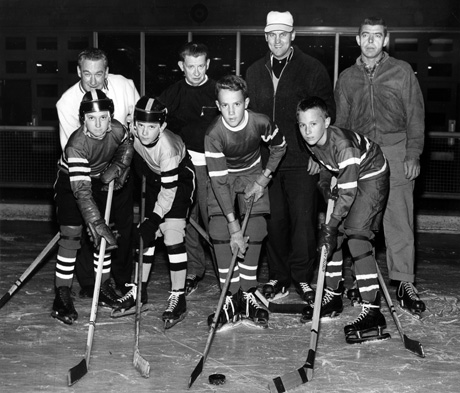 From the collections of the St. Louis Mercantile Library
at the University of Missouri-St. Louis
This photo originally was published in the St. Louis Globe-Democrat on Nov. 7, 1961. It shows players and coaches from the very first youth hockey league in St. Louis, at Steinberg Rink in Forest Park. They are, first row, from left: John Burger Jr., Ed Signaigo, Terry McKenna and Scott Christofferson; second row, from left: Bouncer Taylor, Shrimp McPherson, Eddie Olson and George Milligan. In the photo caption so long ago, the Globe had the wrong first name for McKenna. Perhaps the photographer heard it wrong or wrote it wrong, or maybe the copy editor read it wrong. Whatever the case, almost 52 years later, this serves as a correction.

The year was 1961, 52 years ago, and StL was between stints as a professional hockey outpost. After a 25-year run, including a two-season sabbatical for World War II, the St. Louis Flyers of the American Hockey Association had gone away in 1953, and the St. Louis Braves, the farm team of the Chicago Blackhawks, wouldn’t arrive until January 1963.

Still, there were passionate hockey people in St. Louis, primarily former Flyers who had married St. Louis women and settled here upon retirement – Eddie Olson, Shrimp McPherson and George Milligan, as well as former Flyers coach Ralph “Bouncer” Taylor, among them. A local also was at the forefront of hockey in St. Louis – Bill McKenna, who became smitten with hockey as a boy after the Flyers came to town in 1928.

From those humble beginnings, St. Louis youth hockey has blossomed. Seven St. Louisans play in the NHL, more are in the minors (including McKenna’s grandson, Mike) and numerous others play in junior hockey and at the collegiate level.

Many former Blues players have been instrumental in the rise of youth hockey in St. Louis – guys such as Blake Dunlop, John Wensink, Mike Zuke, Neil Komadoski, Basil McRae, Rob Ramage, Jeff Brown, Rick Zombo, Al MacInnis, Kelly Chase and others. But hockey guys such as Olson and McKenna were there for Day 1.

Consider the times: No hockey team here, not even a hockey rink. The one slab in the area, Wintergarden on DeBalivere, was almost a square in shape with no dasher boards or nets.

According to Terry McKenna, Bill’s son and the father of Mike, Bill supplied the nets; he built them out of 2x4s, bolted everything together at the rink and covered the goals with tennis nets. The ex-Flyers, McKenna and former Eastern prep school players formed a ragtag bunch called the “Octopus,” playing regularly despite skating on the make-shift rink.

In the fall of 1960, according to Terry McKenna, Octopus members Roy Weaver and Jerry Davis learned about an actual hockey rink in Springfield, Ill., complete with boards, nets and, most importantly, ice time to rent on Sundays.

The hockey guys must have felt like they had died and gone to heaven. They responded to this news with one word:

Terry McKenna, who is a longtime off-ice official at Blues games as his father was before his passing at age 77 in 1997, described the hockey commuters for a presentation when his father was inducted posthumously into the St. Louis Amateur Hockey Hall of Fame in 2008.

“A group of the Octopus, rink rats from recently opened Steinberg rink, pond hockey players and respondents from a newspaper ad began a weekly trip to Springfield to enjoy hockey,” Terry McKenna wrote. “We would meet at a parking lot next to the Veterans Bridge (now MLK) and, at 8 a.m., the car pool would head north on Highway 66.

“After hockey practice, the budget-minded went to McDonalds for 15￠hamburgers and no inside seating. Others stopped at Art’s Restaurant and Motel in Litchfield (Ill.) where coach Olson would preside and offer tips about life on the road with his many hockey teams.”

The Octopus went to tournaments within driving distance in the Midwest, and played in what Terry McKenna called “a loosely formed league that had Peoria, Champaign, Joliet and Wilmette.”

Youth hockey began the next year with the league at Steinberg. An account in the Globe Democrat on Nov. 7, 1961, included the above photo and details of that first league.

“The Blackhawks, coached by Walter Pierce and Ted Mueller, won the bantam title in 12-14 age bracket with four victories and two ties. … Steve Flavin was the leading scorer with five goals and four assists. …

“In the Peewee division under 12, the Sertoma Flyers won six and tied one. … The winning team (was) coached by Bill Richards, Rev. W. Murray Kenney and John Taylor. … McKenna was the leading scorer with nine goals and an assist.”

The article reported that league director “Bouncer Taylor … said plans are already underway for an expanded schedule next season.”

Sure enough, youth hockey expanded the next year with the opening of the rink at Shaw Park in Clayton. Though the rink was exclusively for Clayton residents, Olson had brought players from the Steinberg league and would have none of that. According to McKenna, “Olson coached many of us in the use of fictitious addresses.” Shaw Park teams played teams from Steinberg.

When the Braves moved to town, Olson – then officiating Central Hockey League games with McKenna – talked Arena officials into allowing the Springfield roadtrip group to play in the old barn; hence, a men’s senior hockey league began in the Mound City.

There followed an indoor rink, Winterland, on St. Charles Rock Road near Lindberg, allowing for a bigger men’s senior league and more youth hockey. Outdoor rinks soon opened in Webster Groves, Kirkwood (Bill McKenna was among those who started the youth hockey program there) and Granite City.

The rest, as they say, “is history.” StL youth hockey has evolved from those humble beginnings to what it is today. St. Louisans now play at every level of hockey, McKenna’s grandson has played in the NHL, and lifelong Blues fan Brandon Bollig has his name etched on the Stanley Cup as a member of the champion Chicago Blackhawks. (OK, he’s with the B-hawks, the Blues top rival, but let’s not hold that against him. He’s a kid from St. Louis with his name on the Cup. Pretty cool.)

What a journey it’s been. Olson and Bill McKenna would be proud to see that what they had a hand in starting 52 years ago has grown to this extent. But they were humble guys, so they probably would shrug off any praise and dish credit to all of the others who helped out way back when and in subsequent years.

And, most likely, they also would say that the best is yet to come – with even more St. Louis players in the NHL and more St. Louisans with names on Lord Preston of Stanley’s chalice.

Mound City Sports came about in September 2012 to offer coverage of the St. Louis Blues and add another voice to professional hockey coverage in St. Louis, aka the Mound City - an early colloquialism referring to St. Louis, which once featured numerous earthen mounds of the Native American Mississippian culture. Alas, only one mound remains, the Sugarloaf Mound in south city along the Mississippi River. Unfortunately, the NHL lockout delayed the Mound City Sports website until January 2013 when the NHL owners and players agreed to a Collective Bargaining Agreement, the lockout ended and play finally, and thankfully, resumed.