Ex-Blues GM made lasting impact on this scribe. 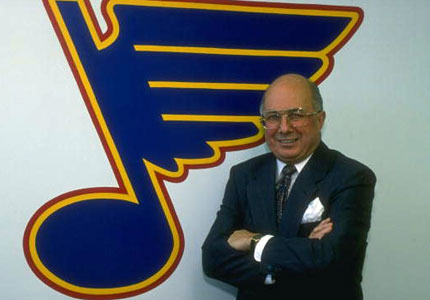 WEBSTER GROVES, Mo. • The Tweet from @STLBlueshistory hit the nail on the proverbial head.

Two years, it’s neither a long time nor a short time, just the inevitable passage of time in the circle of life, but the passing of The Professor undoubtedly has left a void in the lives of his family and many friends, as well as fans in Blues Country … and this scribe, too.

The Tweet got me to thinking about my days as a young hockey scribe and Prof pretty much taking me under his wing, showing me the ropes and teaching me about the game he loved.

For a kid from small-town southern Illinois, this was heady stuff. Just think, a guy who grew up loving the Blues and hockey, chose the Confirmation name of a Blues goalie (thank you, Jacques Caron) and brought street hockey to his grade school mentored by a six-time Stanley Cup winner from the exotic environs of Montreal … it’s beyond words, really. Beyond special.

I told Ron so, actually wrote him so – I’m a writer, what can I say? – in a thank you note for a book of remembrances at his going-away party in 2002 at Warson Woods CC. His St. Louis friends gathered to send off The Prof to his beloved Montreal; Blues alumni, front-office personnel past and present, the Chairman Mike Shanahan and many others – basically everyone still in StL who had been associated in any way with the Blues since their debut in 1967.

What a neat gathering. It was so great to see everyone, but I felt a twinge of sadness at the end of the night with the realization that this probably would be the last time this particular group would be together. It was. We never went that way again.

The Prof wasn’t the “straw that stirred the drink,” so to speak, but he was a linchpin and, at the time, the longest tenured GM in Blues history at 11-plus seasons (since surpassed by the 13 seasons of Larry Pleau). Ron had been a constant for almost two decades, for more than half of the Blues existence – first, as GM in the first season under owner Harry Ornest in 1983-84 through the next-to-last season of the Chairman’s ownership in 1993-94, then in his days as sort of a GM emeritus/ambassador.

He should have been GM for another five years or so, but The Prof gracefully stepped aside when the Blues went over to the dark side in the mid-90s. However, it was telling to this reporter that he referred to his replacement as “The Messiah.” He spoke those words in praising the man who succeeded him, but I remember nothing else he said, only, “The Messiah.” To me, that was a shot, beautiful in its simplicity; he didn’t need to say anything else.

The Prof had a brief encore as interim GM after the Blues fired the messiah, and he was instrumental in hiring as head coach a young assistant who had been part of a Stanley Cup winner in 1996 at Colorado: Joel Quenneville.

We know how that worked out. Coach Q is the Blues’ franchise leader in coaching victories at 307, and he has gone on to win two Cups with the hated Chicago Blackhawks. The Prof also gave first jobs to Jacques Demers (a Cup in Montreal), Jacques Martin, Brian Sutter and Bob Plager (more on that in a moment); that’s 636 victories in Blues history. Quenneville and Martin are among the most successful NHL coaches ever; Q ranks third in NHL history with 689 wins and counting, Martin 11th with 613.

I included Bobby Plager because he’s the only coach who has a 1.000 winning percentage against the great Scotty Bowman, the NHL’s all-time wins leader with 1,244. The Blues beat Bowman’s Penguins 6-4 in Bobby’s 11th and final game as coach. The only experienced coach Ron hired was Bob Berry, to replace Plager; a pretty good hire there, too.

Needless to say, The Prof had a knack for envisioning someone blossoming in an expanded role, whether coaches or players. He brought in Brett Hull, Adam Oates, Curtis Joseph, Brendan Shanahan, Jeff Brown, Al MacInnis and many, many others. Those players shaped the franchise, which didn’t miss the playoffs at all in Ron’s tenure and reached the Western Conference Finals against all odds in 1986. Hullie represented Ron’s best move of all; his exploits made possible the downtown barn to replace The Arena.

Like many others, I miss the old barn on Oakland Avenue. I still have my pressbox seat, and in my old age, I’d like to use a GPS to find the exact location of my spot in the pressbox and live in that loft on the grounds of the old Arena.

Those were the days, a special time to be covering the Blues when it was still a Mom-and-Pop organization before the hockey world became all corporate and the spiffy new buildings included boxes to segregate team personnel from media.

Nowadays, you might see Blues GM Doug Armstrong on an elevator or briskly walking through the pressbox to his off-limits management box. In the old days, I routinely sat next to Prof at Blues road games, and he was known to visit the pressbox at The Arena shouting about something.

That was a scene, man. Ron’s pressbox tirades are legendary. Heck, the media in Toronto attended Blues’ tilts at Maple Leaf Gardens expressly to witness Prof’s antics. One time in Toronto, I made the mistake of leaning back in my chair to take a look at the commotion he was creating when a chair whizzed by my head.

Another time, when the Blues won at the Spectrum in Philadelphia for the first time in eons, Prof jumped up and down in what only can be described as delirious celebration, and accidentally whacked me on the head. When I kept working and didn’t respond, he bellowed, “Show some emotion. You don’t know what emotion is.”

I just typed away and said something about being on deadline, and he immediately stopped his celebration and apologized.

To me, that anecdote is quintessential Ron Caron. He could be wildly emotional one moment, and deeply caring and understanding the next. Of course, we had blow ups over the years, but within minutes, we’d be talking about the story of the day or he’d be holding court and regaling myself and others with entertaining stories about his life in hockey. That’s just the way he was.

Someone once told me that Prof would be great in this day and age on Twitter. I laughed. He’d last about five seconds in 140 characters; he’d write something off-color, as he often uttered in pressboxes throughout North America, someone somewhere would take offense, it’d blow up into God knows what kind of controversy, and that’d be it. At best, the Tweet would be deleted; at worst, he’d be fired. Prof and Twitter? I don’t think so.

After Prof returned to Montreal in ’02, he didn’t have much time to enjoy his homecoming. He suffered a debilitating stroke and spent his last years in a nursing home. But he never lacked visitors. His buddy Serge Savard and Canadiens icon Bob Gainey regularly visited to keep him company, as did his family and many friends – old Canadiens and hockey people in town working for teams playing the Habs. When the Blues made their every-other-year trip to Montreal, he received many visitors.

Ron loved his Blues and his Canadiens and baseball’s New York Yankees until the end. Fittingly, the Blues were in Montreal to play the Habs on the day he passed.

One of the most touching and poignant moments of the ceremony at which the Blues retired Brett Hull’s No. 16 a few years ago at Scottrade Center was a video message from Prof on the jumbotron. The stroke and age had left him gaunt, but he otherwise seemed the same as ever, congratulating Hullie, wishing him the best, and saying hello – and, really, goodbye – to Blues fans.

I cried then, and I’m crying now.

RIP, Prof. And thank you.

Mound City Sports came about in September 2012 to offer coverage of the St. Louis Blues and add another voice to professional hockey coverage in St. Louis, aka the Mound City - an early colloquialism referring to St. Louis, which once featured numerous earthen mounds of the Native American Mississippian culture. Alas, only one mound remains, the Sugarloaf Mound in south city along the Mississippi River. Unfortunately, the NHL lockout delayed the Mound City Sports website until January 2013 when the NHL owners and players agreed to a Collective Bargaining Agreement, the lockout ended and play finally, and thankfully, resumed.